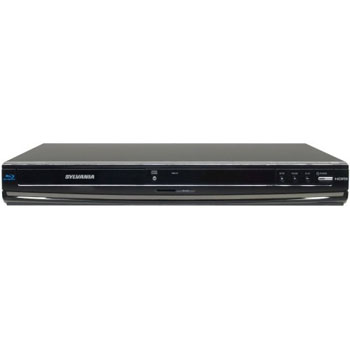 Write a Review
5 Review(s)
Overview Reviews Tell a Friend
High Definition Blue Ray DVD Player, with HDMI output,1.1 profile with Bonus view.HDMI output,1080P upconversion,progressive scan,HDMI 1.3 version support,deepcolor processing,Dobly Digital output.Dolby digital plus,Dolby true HD,DTS,DTS HD,LinearPCM. Advanced user interface,Vitual surround sound and Screen Saver.Parental Lock,Trilingual OSD,SD Memory Slot.
Honest, no-nonsense reviews on 02/09/10 09:00pm
Though I haven't had the chance to use all of the features on this unit, one thing really impressed me right away. It took less than 5 minutes from opening the box to watching the opening credits on a great movie, "Cinderella Man". Plugged in the HDMI cable that had been previously connected to a non-Blu-Ray player, plugged in the power cord, put the batteries in the remote, open/closed disk-drawer with disk in it, pressed play, and movie began. Couldn't have been easier.I've owned about a dozen different brand DVD players over the years, including Sylvania and, regardless of the brand, they all had superior picture, but a rather limited life of the unit. So in my opinion, and especially for this purchase, it did not make sense to spend a lot on a new player, when the picture and sound are about the same on them all. So I went lowball and applied a $50 Amazon gift card to the $99 price, and got the whole shootin' match delivered within about 3 days (with free shipping, no less) to my door for $49 out of pocket. A new Blu-Ray player for $49? Yep, it happened!To see the picture from this Sylvania Blu-Ray on my plasma screen Samsung, you'd never know it wasn't a $400 unit. So I saved enough money to afford a few more Blu-Ray movies, though I actually get them now from Netflix.Once again, Amazon has come through for me with service, speed, and quality.
Lawrence Johnson on 02/03/10 09:00pm
I bought this as a deal of the day and am very pleased with it. Took it out of the box connected it to my tv and started watching a movie right away. First movie was a regular dvd I had and the improvement in the picture was wonderful. Went out later and got a blu ray movie and picture was even better. This player has all of the features I need. (It plays movies.) It may be slow loading but I watch movies to relax not to do time trials. The time it takes to load gives me plenty of opportunity to get a snack and get settled in. Would reccomend this to anyone.
CaptiveWildWoman on 02/03/10 09:00pm
I purchased this player for the $89.99 deal and I'm sure glad I did! It arrived today, brought it home and had it connected to my HDTV in two seconds via HDMI. Put in a regular DVD just received from from Netflix, "The Final Destination," and it played perfectly with a wonderful picture.I must admit, I was skeptical about the difference upscaling could make...now I'm a believer! Can't wait to try a Blu-Ray disc now. The contrast is amazing. The unit itself is sleek and quite unobtrusive; also, it has no annoying light or clock that stays on when the unit is off.As stated by other reviewers, it *does* take a little time to load discs, but that's quite minor. I played around with the Pause and Stop buttons; it immediately starts up from Pause when the Play button is depressed, and if you turn off the player, it will give you the option of starting the movie where it left off, or going back to the menu.All in all, I'm very happy with this player and I'm looking forward to many happy viewing hours! Buy it!!!
Project Man on 02/02/10 09:00pm
I bought this player through Amazon's deal-of-the-day on sale for $69.99. So easy to set up that my 10 y/o nephew had it up and running in 5 minutes. Operation is simple and picture quality is excellent. There is a little lag time spooling up a blue-ray disc but it's not a deal breaker. It is not feature rich but it delivers a user-friendly system for a low price.
Floyd Goodrich on 02/02/10 09:00pm
I saw this as a gold box deal for $89 and read the good reviews here on Amazon. I received mine, hooked it up with a HDMI cable and it performed perfectly. I have a $300+ Panasonic Blu-Ray player and I rate this Sylvania just as good (well almost as my Panasonic also plays HD video recorded on SD cards, this Sylvania only plays JPG stills from an SD card, but still its a nice feature). I have to admit I was nervous about the name "Sylvania" as IMHO this company was left in the dust a few years ago when it came to quality products. I only hope this Blu-Ray player lasts a few years as initially it plays wonderfully, but for $89 I wont complain.