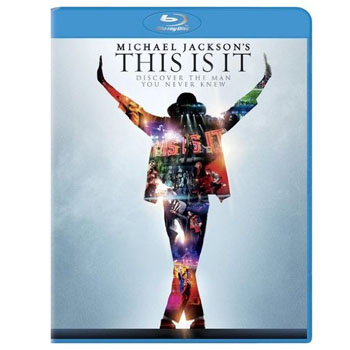 Michael Jackson: This Is It [Blu-ray]

Write a Review
5 Review(s)
Overview Reviews Tell a Friend
Michael Jackson's This Is It will offer Jackson fans and music lovers worldwide a rare, behind-the-scenes look at the performer as he developed, created and rehearsed for his sold-out concerts that would have taken place beginning this summer in London's O2 Arena. Chronicling the months from April through June 2009, the film is produced with the full support of the Estate of Michael Jackson and drawn from more than one hundred hours of behind-the-scenes footage, featuring Jackson rehearsing a number of his songs for the show. Audiences will be given a privileged and private look at Jackson as he has never been seen before. In raw and candid detail, Michael Jackson's This Is It captures the singer, dancer, filmmaker, architect, creative genius and great artist at work as he creates and perfects his final show. Directed by Kenny Ortega, who was both Michael Jackson's creative partner and the director of the stage show.
Alex H. Taylor on 02/09/10 09:00pm
This Blu-ray (movie) is a thinly discuised way of extracting money from Michael's fans. He looks frail and out of it. He has no lasting energy and looks like the only thing keeping him going (beside the constant "stroking") is illicit. This is not a fitting tribute to his legacy. I couldn't help but think as I watched... that had he not succumb to a tragic overdose now, he probably wouldn't have survived the exhausting concert tour ahead of him. (another great performer seduced by the dark side)
ben on 02/08/10 09:00pm
its so cool every one thats a mj fan needs this it all thats left god bless his kids and family.
Gladys Q. De Rojas on 02/08/10 09:00pm
How about My Friends Fanaticos of MJ .. I salute you and I write from Venezuela, and asking for his help, since they are in America, to see if I could help telling me if the movie "This Is It" in format Blu-ray comes with subtitles in Spanish, as characteristics appears only in English and French, I'm really very interested in acquiring this film so beautiful and so full of talent as is seen in operation MJ. many greetings in advance and wait for your answers .. thanks and God bless you all.. Raúl Rojas from Venezuela- Caracas
KatyaM on 02/08/10 09:00pm
I saw this movie twice in the theaters, and since then I couldn't wait for the DVD. I really like the special features, and the movie itself. This movie is perfect for any Michael Jackson fan. Michael will be missed, and I'm so happy they had this footage to share with the world. Long live the King of Pop!!
Coach 27 on 02/08/10 09:00pm
What a waste. The recording studios, producers, estate, and capitalist money-grubbers are making SOOOOOO much $$$ off of all you pansies that can't wait for a true portrait of the artist to be released. Shame on you.He'll be back in due time. He just took a short break to play golf with Elvis! Save your hard-earned money and be patient. This is NOT a piece of art.