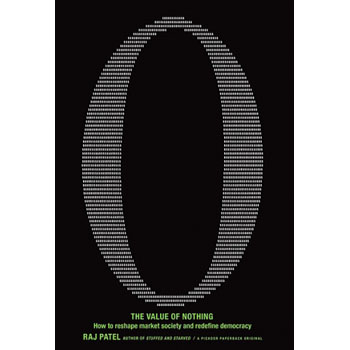 The Value of Nothing: How to Reshape Market Society and Redefine Democracy (Paperback)

Write a Review
0 Review(s)
Overview Reviews Tell a Friend
Starred Review. Expanding on his analysis and recommendations in Stuffed and Starved, which located the horrifying imbalance in the world's food system in its profit-driven framework, activist and academic Patel critiques free market culture at a moment of universal crisis, both economic and environmental. Beginning with a historically grounded account of market society's operative assumptions, the way capitalism sets the terms of value, Patel takes aim at the notion of Homo economicus: a vision of human beings as self-interested utility-maximizers integral to market society's dollar-valuation of everything. Through a shrewd and absorbing discussion, Patel exposes the flaws in the model of the world in which people are... prepared to override their own better judgment in service of their selfish natures and the nominal separation of the economy and the state, describing the relationship as compromised but also more plastic then we are often led to believe. With due attention to the developing world as well as Europe and North America, the author offers examples of the counter movement underway and urges us to build on a vision of ourselves far more extensive, generous and hopeful than that confined to market society's Homo economicus.
Currently there are no reviews for this product. Share your opinion with others, be the first to write a review.