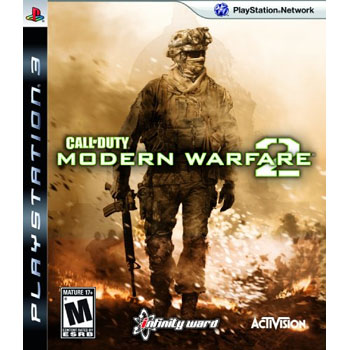 Write a Review
5 Review(s)
Overview Reviews Tell a Friend
Acclaimed developer Infinity Ward brings you Modern Warfare 2, the sequel to the best-selling shooter of all-time, Call of Duty 4: Modern Warfare.
trainer73096 on 02/09/10 09:00pm
I have never played a game that was so addicting. I'm a fan for sure!
Rubyhill on 02/09/10 09:00pm
It is rated for mature people, but I bought it for 17 year boy as a Christmas gift. I occasionally played it with the boy and enjoyed playing it. Initially I had difficulties controlling the game character, but I finally was able to control the character and to aim targets. Graphic and sound are so realistic that I felt like I was in the middle of real battle and fear of getting killed. IMHO, this game is absolutely for mature people and a not for under aged children.
Shrut S. Patel on 02/09/10 09:00pm
The game is awesome, especially the Spec Op missions. You can play those online with your friends, which make it much more versatile gaming. There are a lot of new weapons, and abilities for the online play, which make it easy for many newcomers to the game to play. Overall, great buy and a quality game.
Aub on 02/08/10 09:00pm
I can't get him to stop playing. He finished all levels in 2 wks. Now he is playing online.
J. Walton on 02/07/10 09:00pm
Simply put this is the best online multiplayer shooter game out there. None of the others can compare. COD is at the top whether you like it or not. Enjoy as you will spend hours and hours playing this online.