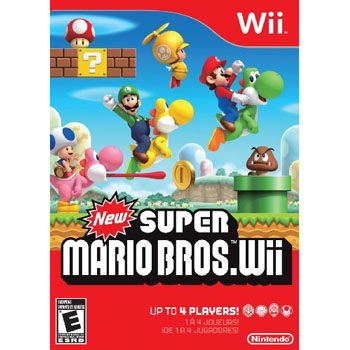 Write a Review
5 Review(s)
Overview Reviews Tell a Friend
Developers at Nintendo have dreamed of creating a simultaneous multiplayer Super Mario Bros. game for decades. The Wii console finally makes that dream come true for everyone with New Super Mario Bros. Wii. Supporting 2-4 players in side-scrolling co-op and competitive platforming action, and featuring a mix of fan favorites and new characters, new powerups and various input options via the Wii Remote, it is destined to become an instant classic in one of the most beloved game franchises of all-time.
S. Woods on 02/09/10 09:00pm
The graphics are fantastic and the game is a world of hours and hours of fun
NWRDGTCHR on 02/08/10 09:00pm
My kids love this game and are always wanting me to play 3 player with them. However, this is one Wii game that I just do not have talent for. It is worth the money if you have children who are serious gamers that don't require your help to get to the next level of play. My 9 and 13 year old love to play this game.
James N. Seda on 02/07/10 09:00pm
Absolutely wonderful! For everyone and anyone that has ever played supermario bros in all it's incarnations. Brilliant and fun ! Now play with up to 4 players at anytime for more craziness. Our family just loves it!!!
HotDog on 02/07/10 09:00pm
Seriously addicting. Anyone who has a history of playing any Mario Bros game will agree, once you start playing this game it might consume your life until you finish the game. Single player mode is pretty standard, awesome Mario Bros game play. But once the game is completed in single player mode, it gets much more difficult with every player addition. More difficult and more fun. If you are thinking about getting this game, do it.
Jawnge on 02/07/10 09:00pm
Galaxy was fun in all, but it didn't have the same Mario feel that this one has. Reminds me of the many hours spend playing the original Super Mario Bros. 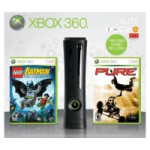